Raver was born and raised in New York City by her mother, Tina Raver, and her stepfather, Chris Meltesen. She has a sister, Cybele Raver, as well as three half sisters, Nadja Raver, Grace Raver, Aimée Raver, and two half brothers, Jacob Raver, and William Raver. She attended Northfield Mount Hermon School, a boarding school in Northfield, Massachusetts. Raver attended Boston University, where she received a Bachelor of Fine Arts degree in drama. Raver continues to study theater in New York with teacher and mentor Wynn Handman. She is fluent in French and German, a language that she learned as a child from her German-born mother.

Raver got her start as a child star in 1975 appearing on Sesame Street at age 6. She remained on the show for three years. She initially acted in commercials for Visa and Jeep when her adult career began. Her first prominent role was her Broadway debut in 1995 in the Philip Barry play "Holiday" in which she co-starred with Laura Linney and Tony Goldwyn. She also appeared in the feature film City Hall with Al Pacino. She also co-starred with John Spencer (of NBC's The West Wing) and David Schwimmer in "The Glimmer Brothers", a production of the Williamstown Theatre Festival, written by Warren Leight. After her time on Third Watch, she was cast as Audrey Raines in the popular television series 24, and was a series regular for two seasons.

During the Fall 2006 television season, Raver starred in the ABC television series The Nine. Although the show received outstanding critical reviews, it did not take off in the Nielsen ratings, and was therefore cancelled. She reprised her role in 24’s season 6 as Audrey Raines. The character was in a catatonic state at the end of the season.

The 1997 TV movie Soul Mates, starring Raver, is shown by market researchers at Television Preview. Raver joined Season 6 of Grey's Anatomy in a recurring role as Dr. Teddy Altman, a cardiothoracic surgeon brought in by Dr. Owen Hunt, who served with her in Iraq. She made her on-screen debut on November 12. It was announced on January 4, 2010 that Raver had become a series regular on the show. On May 18, 2012, Grey's Anatomy creator, Shonda Rhimes, announced that Raver had decided to leave Grey's Anatomy after three seasons, "I know this season’s finale had some surprises for viewers and the exit of Kim Raver was one of the big ones. But Kim’s series option was up and she was ready to give Teddy Altman a much-needed vacation. It’s been a pleasure working with someone as talented and funny and kind as Kim; everyone is going to miss her terribly. I like to imagine that Teddy is still out there in the Grey’s Anatomy universe, running Army Medical Command and building a new life." When the news of her departure was released, Raver wrote on her Twitter, "I've had one of the best times of my creative career working on Grey's with Shonda, Betsy and the best cast on Television," she wrote, adding: "I feel fortunate and grateful to have worked with such an amazing team at GA (Grey's Anatomy). [I] am going to miss everyone!! And to the GA (Grey's Anatomy) fans, you guys rock! I am sure S9 (season nine)will be great!

In 2014, Raver returned to the role of Audrey Boudreau (née Raines) for the twelve-episode 24: Live Another Day. In 2015, she had a guest-appearance on the eleventh season premiere of Bones. In 2017, Raver recurred on the fifth season of Ray Donovan and also returned as Dr. Teddy Altman on Grey's Anatomy for its 14th season.

Raver married Manuel Boyer, a French actor and writer, in 2000. She has two sons, Luke West Boyer (b. 2002) and Leo Kipling Boyer (b. October 9, 2007). Leo Kipling was born in New York City where Raver was shooting in Lipstick Jungle. Raver returned to work on the show only a few weeks after giving birth. 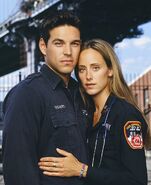 Add a photo to this gallery

Retrieved from "https://thirdwatch.fandom.com/wiki/Kim_Raver?oldid=5957"
Community content is available under CC-BY-SA unless otherwise noted.